From Ransome to Robson 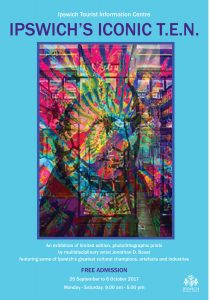 From Ransome to Robson; exhibition at Ipswich TIC

Ten works – including the print entitled Ipswich, Iconic, O.N.E. featuring Ipswich’s own giraffe and now hanging in The Giraffe House  – are on show from 25th September – 6th October 2017 in the exhibition space at the Tourist Information Centre in St Stephen’s Church, Ipswich.

Created by the multi-disciplinary artist Jonathan D. Boast as part of his Arts Council funded residency at Ipswich Museum and Art Gallery earlier this year for the Eduardo Paolozzi exhibition GENERAL, DYNAMIC, F.U.N., the show is an opportunity to see all ten pieces together in one space.

This collection of limited edition photo-lithographic prints features some of Ipswich’s greatest cultural champions, artefacts and industries. They range from Robert Ransome the industrial innovator, through William Kirby, first President of Ipswich Museum to Sir Bobby Robson, renowned football manager. The selection tells the story of the town through iconic portraits and objects spanning 250 years. Jonathan has used digital and traditional processes to layer imagery gleaned from Ipswich Museum’s collections to create complex kaleidoscopic composites that both echo the pop-art aesthetics of Paolozzi whilst being thoroughly contemporary and individual. The works are available to purchase individually at £220 or as a set for £2,000.

Jonathan was born and lives in Suffolk. He was educated in Ipswich before his career and studies took him to Wales, Germany and Barcelona. He set up studios in East London in 1999 and began to fuse his personal practice with collaborative projects and commissions in all media. He has worked with artists such as Gilbert and George and for Westminster Abbey, Daimler Chrysler and The Burlington House Group. These collective projects have resulted in new artworks being exhibited and installed around the UK in venues as varied as the V&A, Chelsea F.C., The Tower of London, Westminster Abbey and INIVA.

For more information on sizes and prices see www.jonathanboast.com 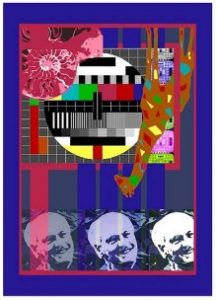 Ipswich, Iconic, O.N.E., print by Jonathan D Boast during his residency at Ipswich Art Gallery, using material from the Ipswich Museum archives and experiences from childhood. The giraffe can also be seen, in its glass case, in another print in the series: Kirby, Gippeswic, 1.S.T